The results of our fourth OpenRefine user survey are out! We received 178 responses in less than four weeks (vs. 122 in 2018 over seven months)!

The goal of the study is to keep an accurate and up to date picture of the OpenRefine community. When possible, we compared the 2020 results with our previous survey. You can view the full details of the 2012, 2014, and 2018 surveys

Community you identify with​

While librarians remain the largest group (37.64%), Wikidata contributor (and semantic web users - 12.92%) made an entry as the second-largest user group in 2020! Researchers now rank third with 10.7% of the user base. Note the community Archivist was not suggested in the answer but still gather 4.49% of the answer! 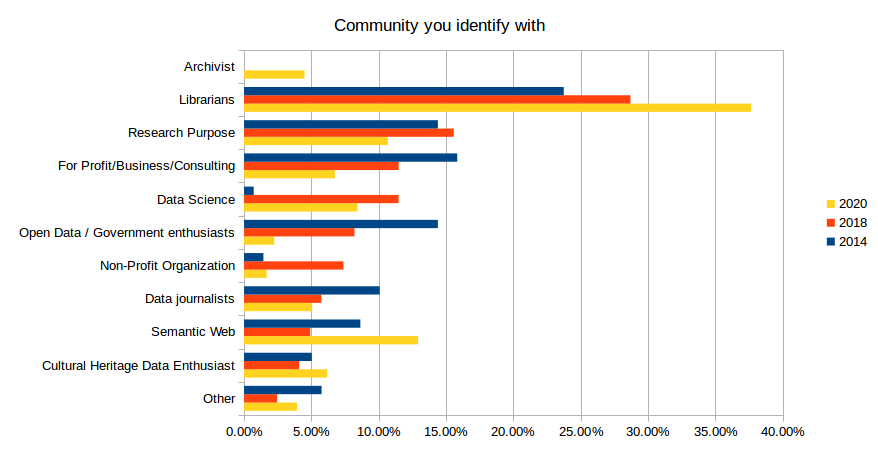 How often do you use OpenRefine​ 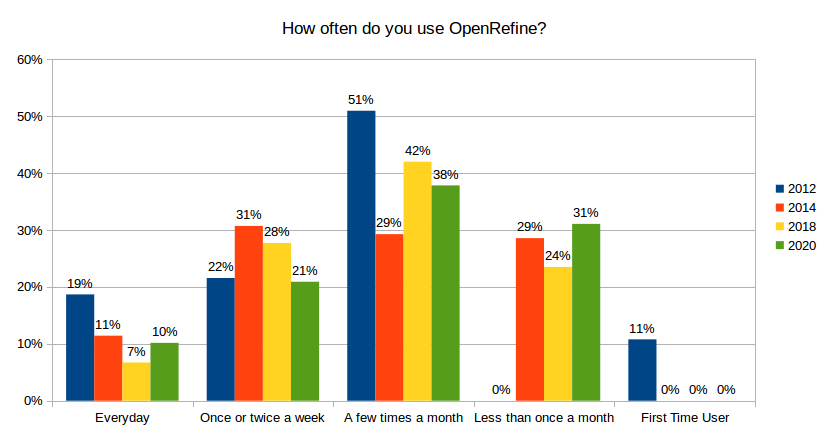 For how long have you been using OpenRefine​

Users with over two years of experience keep growing years over the years and now 57% of the user base (vs. 51% in 2018). We take it as a positive fact where we can keep our user base while being able to attract new users.

Note that in the below analysis, we included users that never used OpenRefine in the less than six months group (five respondents in 2014, nine in 2018, three in 2020). 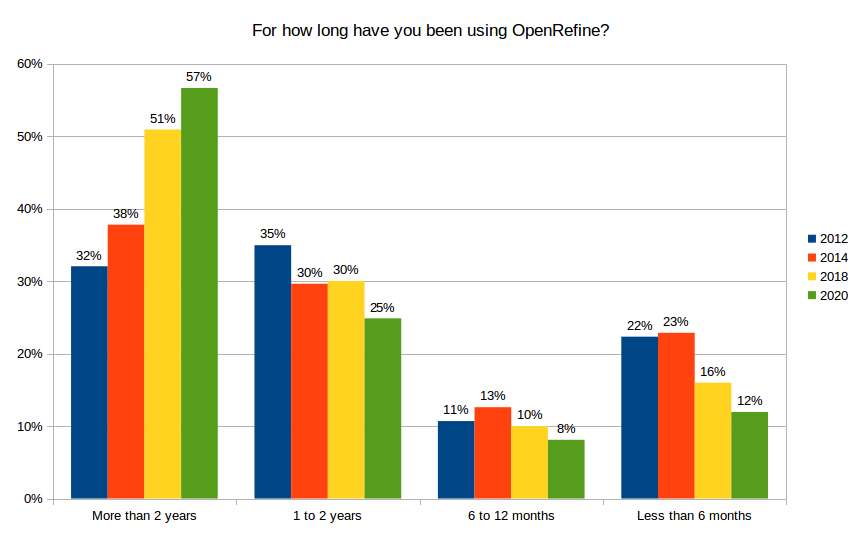 How will you rate your skills using OpenRefine​

In all our previous surveys, we asked respondents to rate their skills from one to five. One being a novice in Refine and five being a master. The number of novice respondents dropped in 2020 from 16% to 7%. The skills level is related to the frequency of usage and not to the years of experience. No matter how long you have been using GREL, you got to practice it every day to improve! 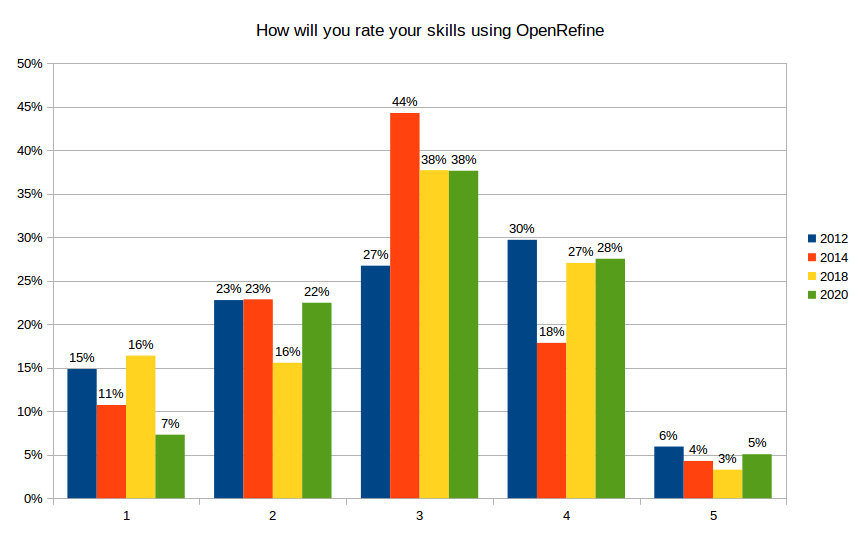 While the majority are using the latest stable version at the time of the survey (OpenRefine 3.2) 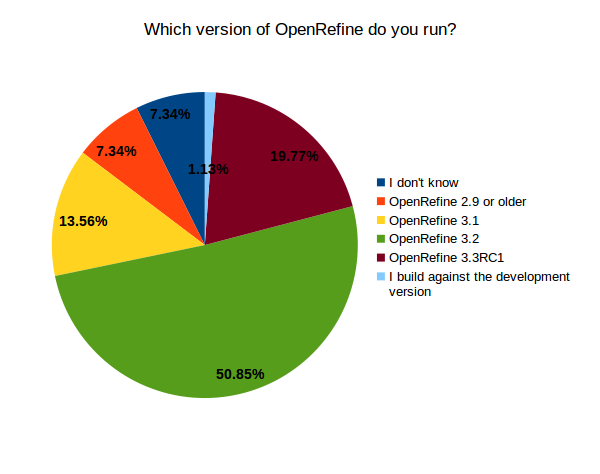 High-level tasks you do with OpenRefine​

Usage breakdown remains stable compared to the 2012 and 2018 survey. With two notables differences:

Note: Respondents can select multiple answers. Click on the image to enlarge it.

Do you use plugin or extension?​

72% of the respondents do not use plugins or extension; 11% installed only one plugin, and 17% of them installed more than one. Overall we see a drop in usage for many plugins.

The top three plugins are:

The DBpedia extension has not been updated for seven years, but its usage grew from 5.7% two years ago to 10.9% in 2020. The usage of DBpedia is not linked to any particular community (6 librarians, 3 for-profits, 2 archivists, and one for cultural heritage, data scientist, researcher and wikidata contributor). Any explanation is welcome!

Note: Respondents can select multiple answers. We consolidated the 41 blank answers with I don't use plugin or extension. Click on the image to enlarge it.

Do you use a reconciliation service?​

Note: Respondents can select multiple answers. Click on the image to enlarge it.

The following word clouds are more eye-pleasing than an in-depth analysis.

Why did you choose OpenRefine (Which features)​ 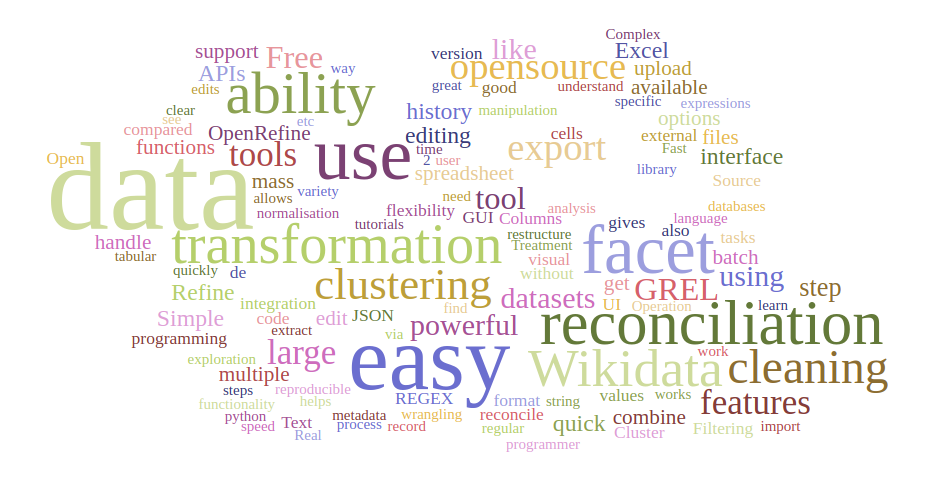 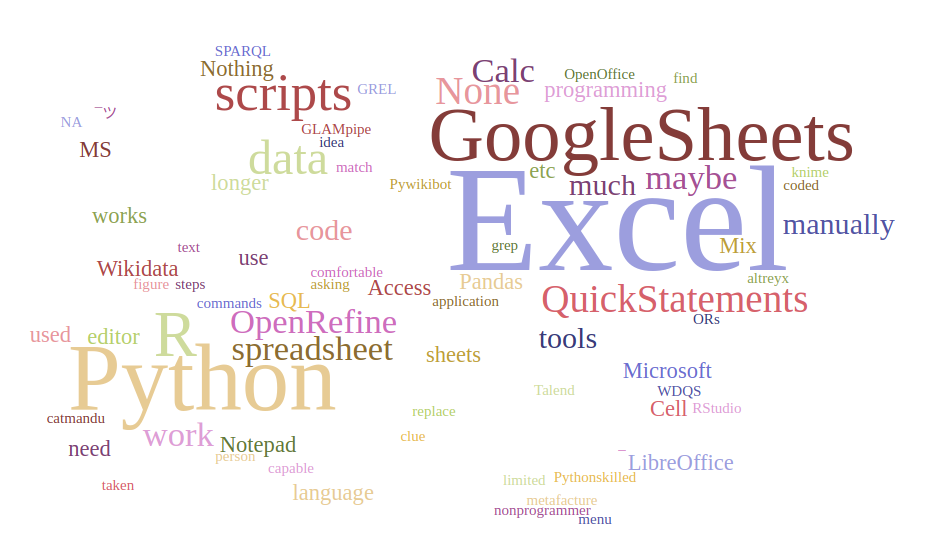 The most common expressions to describe OpenRefine are "Excel on steroid" and "a data cleaning tool." 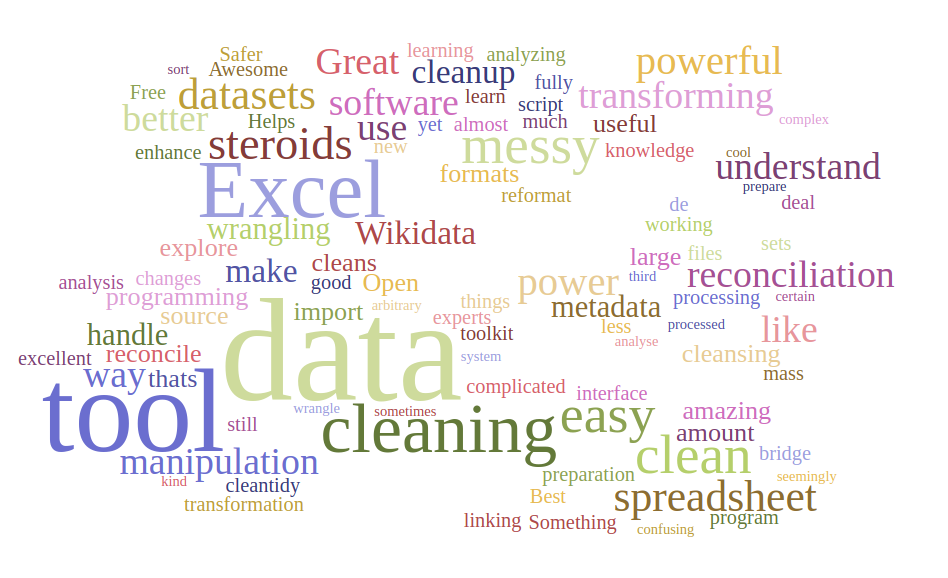 From the Feature Request and Anything to add​

We compiled below suggestions and feature requests submitted via the survey.

We received three separate requests to improve the history in the way described in our roadmap.

Respondents asked for an easier way to edit/tweak operation history (i.e. adjust an edit made multiple steps ago without losing subsequent steps). It would be nice if cell provenance could be accessed programmatically or via the interface. So, for instance, in terms of rewinding to a certain state, it would be nice to know at what step a cell/row/column last changed, or what the previous state of the cell/row/column was, or what the state was at a particular step.

Plugin to support in core​