You can use expressions in multiple places in OpenRefine to extend data cleanup and transformation. Expressions are available with the following functions:

In the expressions editor window you have the opportunity to select a supported language. The default is GREL (General Refine Expression Language); OpenRefine also comes with support for Clojure and Jython. Extensions may offer support for more expressions languages.

This page is a general reference for available functions, variables, and syntax. For examples that use these expressions for common data tasks, look at the Recipes section on the wiki.

There are significant differences between OpenRefine's expressions and the spreadsheet formulas you may be used to using for data manipulation. OpenRefine does not store formulas in cells and display output dynamically: OpenRefine’s transformations are one-time operations that can change column contents or generate new columns. These are applied using variables such as value or cell to perform the same modification to each cell in a column.

OpenRefine would work through each row, splitting the “friend” values based on a space character. The value for row 1 is “John Smith” so the output would be “Smith” (as "[1]" selects the second part of the created output); the value for row 2 is “Jane Doe” so the output would be “Doe”. Using variables, a single expression yields different results for different rows. The old information would be discarded; you couldn't get "John" and "Jane" back unless you undid the operation in the History tab.

For another example, if you were to create a new column based on your data using the expression row.starred, it would generate a column of true and false values based on whether your rows were starred at that moment. If you were to then star more rows and unstar some rows, that data would not dynamically update - you would need to run the operation again to have current true/false values.

Note that an expression is typically based on one particular column in the data - the column whose drop-down menu is first selected. Many variables are created to stand for things about the cell in that “base column” of the current row on which the expression is evaluated. There are also variables about rows, which you can use to access cells in other columns.

When you select a function that accepts expressions, you will see a window overlay the screen with what we call the expressions editor. 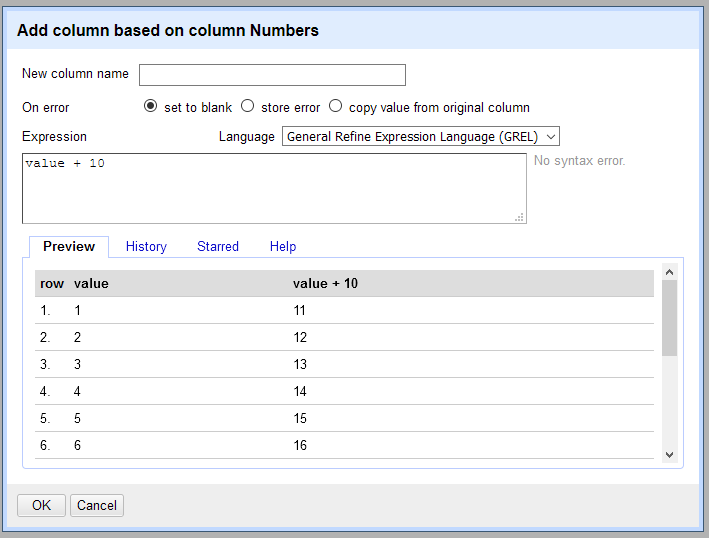 The expressions editor offers you a field for entering your formula and shows you a preview of its transformation on your first few rows of cells.

There is a dropdown menu from which you can choose an expression language. The default at first is GREL; if you begin working with another language, that selection will persist across OpenRefine. Jython and Clojure are also offered with the installation package, and you may be able to add more language support with third-party extensions and customizations.

There are also tabs for:

Starring formulas you’ve used in the past can be helpful for repetitive tasks you’re performing in batches.

You can also choose how formula errors are handled: replicate the original cell value, output an error message into the cell, or ouput a blank cell.

If this is your first time working with regex, you may wish to read this tutorial specific to the Java syntax that OpenRefine supports. We also recommend this testing and learning tool.

To write a regular expression inside a GREL expression, wrap it between a pair of forward slashes (/) much like the way you would in Javascript. For example, in

Do not use slashes to wrap regular expressions outside of a GREL expression.

You can also use regex with Jython expressions, instead of GREL, for example with a Custom Text Facet:

Clojure uses the same regex engine as Java, and can be invoked with re-find, re-matches, etc. You can use the #"pattern" reader macro as described in the Clojure documentation. For example, to get the nth element of a returned sequence, you can use the nth function:

Most OpenRefine variables have attributes: aspects of the variables that can be called separately. We call these attributes “member fields” because they belong to certain variables. For example, you can query a record to find out how many rows it contains with row.record.rowCount: rowCount is a member field specific to the record variable, which is a member field of row. Member fields can be called using a dot separator, or with square brackets (row["record"]). The square bracket syntax is also used for variables that can call columns by name, for example, cells["Postal Code"].

The row variable itself is best used to access its member fields, which you can do using either a dot operator or square brackets: row.index or row["index"].

For array objects such as row.columnNames you can preview the array using the expressions window, and output it as a string using toString(row.columnNames) or with something like:

The cells object is used to call information from the columns in your project. For example, cells.Foo returns a cell object representing the cell in the column named “Foo” of the current row. If the column name has spaces, use square brackets, e.g., cells["Postal Code"]. To get the corresponding column's value inside the cells variable, use .value at the end, for example, cells["Postal Code"].value. There is no cells.value - it can only be used with member fields.

A cell object contains all the data of a cell and is stored as a single object.

Several of the fields here provide the data used in reconciliation facets. You must type cell.recon; recon on its own will not work.

The cell.recon.candidates and cell.recon.best objects have a few deeper fields: id, name, type, and score. type is an array of type identifiers for a list of candidates, or a single string for the best candidate.

A row.record object encapsulates one or more rows that are grouped together, when your project is in records mode. You must call it as row.record; record will not return values.

For example, you can facet by number of rows in each record by creating a Custom Numeric Facet (or a Custom Text Facet) and entering row.record.rowCount.